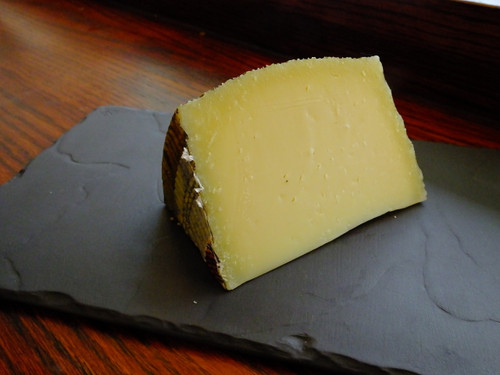 This is probably the original way Manchego cheeses were made by the nomadic families that roamed the countryside in the La Mancha region of Spain (south of Madrid). The families would leave their winter homes in spring and follow their mixed herds as they wandered around looking for pasture. Wherever there was enough to graze for the animals to stay for a few days, camp would be made allowing the families to make cheese from whatever milk was available. In the early 1960’s the landlords put a halt to this free roaming over their lands and the families became sedentary. In 1985 Manchego became a protected name and its production was exactly prescribed. This included that it could only be made from sheep’s cheese. Hence, the mixed (and original!!) Manchego was forced to adopt a new name.

The mix of the milks varies depending on availability, but it is very clear we are not tasting a pure sheep’s milk cheese. There is the sweetness of the cow’s milk and the tanginess of the goat’s milk in addition to the nuttiness that the sheep’s milk brings. The cheese tends to be a little creamier than a Manchego and not as readily grateable due to the fact that it is not aged for much beyond 3 months.

Serving suggestion: on its own, with quince paste (membrillo), with fruit