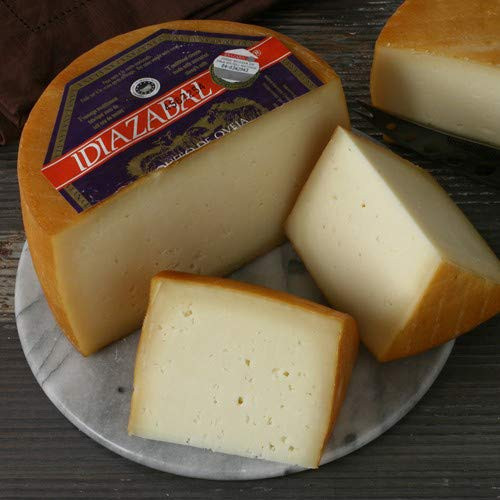 Idiazabal (also known as Idiazabel / Queso Idiazabal La Vasco Navarra) is a traditional, farmhouse, hard cheese made from raw milk of Latxa or Carranza sheep in the Basque and Navarra regions of northern Spain. Named after the village of Idiazabal, the cheese received Spanish D.O. (Denominacion de Origen) in 1987.

In summer, the sheep migrate to higher pastures to graze on the blossoming, new grass. During this time, the artisanal cheese makers milk the sheep, make the cheese and leave it in the rafters to mature for a minimum ripening of 2 months. At the end of summer when the cheese makers return back to the lowlands with their sheep, the cheese has ripened and is ready for sale.

Idiazabal is produced in the shape of a cylinder, with a smooth and hard natural rind that is pale yellow to amber in colour. The cheese has a compact texture, with a few pinprick holes. It is dry, but not crumbly, and feels pleasantly oily in the mouth. The rind carries the marks of the wooden moulds in which it was drained. The characteristic, smoky flavour is the result of the cheeses having been stored near the fireplaces. There were no chimneys in the simple mountain huts, so the cheeses absorbed the sweet, aromatic smoke. The taste of the cheese is reminiscent of burnt caramel and bacon. It pairs well with red wine and cider.

PDO Idiazabal smoked cheese has won a Super Gold medal at the 2014 World Cheese Awards. It is declared as one of the world's 62 best cheeses.