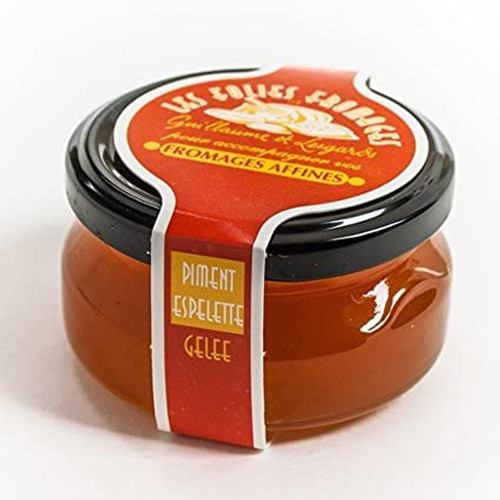 This new spread is intriguing, the ingredients are very simple and the star is Espelette. This chili pepper was brought to France from Central America in the 16th century. Since then, it has been cultivated in Pyrenees-Atlantiques in the northern territory of the Basque region. Known for its special flavor the terroir gives it, espelette is now AOC protected. In this region, pepper has been pushed out as a seasoning and espelette has moved in. Always a fan of Agour with Espelette, we had a feeling this gelle would be delicious. Smooth in texture, with a gentle chili pepper flavor and a mild tickle on the throat, it is great with soft ripened cheeses such as Brie and Camembert and washed rind cheeses such as Pont le Veque. Try it with aged Pyrenees sheep's milk cheeses too. This versatile spread could even be used as a glaze for grilled meat or fish.

Can Bech Golden Apple with Pistachios and Cinnamon Jam

Can Bech Raspberries with Rose Petals and Sichuan Pepper Jam

Can Bech Peaches and Apricots with Goji Berries and Cardamom