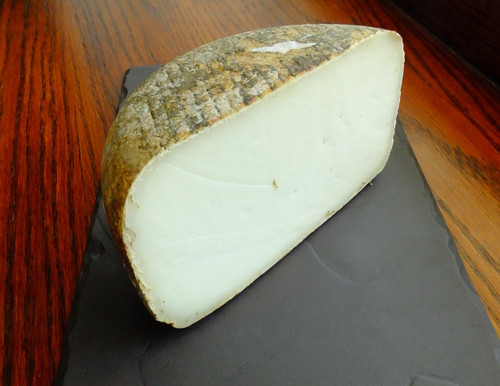 This is one of the cheeses that was reintroduced after democracy returned to Spain. It had been made in mountains north of Barcelona and then aged in the many caves in the area. When the reinvented cheese was aged in the cave it had always been aged in, there seemed to be a problem: whatever the new makers of the cheese tried, they did not seem to be able to get rid of the blue mold that kept on developing on the outside of the cheese. When one of the old makers of the cheese was asked how they had coped with the mold in the olden days she said: “we didn’t, it always had that mold”.

The cheese has a beautiful white interior that tastes slightly nutty but is otherwise quite mild (a result of the fact that the curds get washed).

Garratxa is an excellent tapas cheese, i.e. it can be eaten on its own, but it is also a very good accompaniment to Spanish dried sausages like Chorizo.