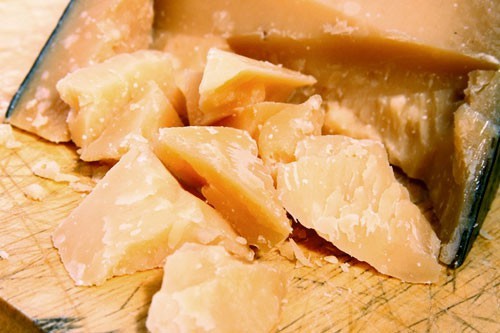 Have you ever wondered what those crunchy bits are in some types of cheese? Well, here is some background information on them. First thing you need to determine is whether you found those crunchies on the outside or on the inside of a cheese. If you only found them on the inside you will have experienced what it is like to bite into a crystal formation that is called tyrosine. Tyrosine is formed when the amino acid chains or proteins in the milk curds fall apart leaving behind a crystalline deposit. The crystals do not greatly affect the flavor and taste profile but definitely change the mouthfeel experience of the cheese. For a long time they were seen as a blemish, it is only relatively recently that placement and cleanness of the crunch are part of the scoring in cheese contests. Look for these crunchies in cheeses like aged Goudas, Parmesan, aged Gruyere.

When you experience the crunch just on the outside of the cheese, you may have – accidentally? – bitten into a bit of the rind of a brined cheese. The brine is used to deposit sought-after bacteria on the outside of the cheese with the idea that the good bacteria will ward off the bad bacteria and also develop flavors deeper within the cheese. It is always a good idea to go carefully with the rinds of very aromatic cheeses like Munster d’Alsace, Grayson, Taleggio. 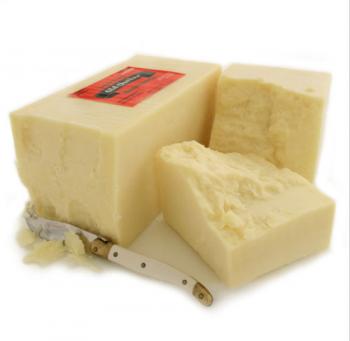 Have fun doing some crunchie experimentation!