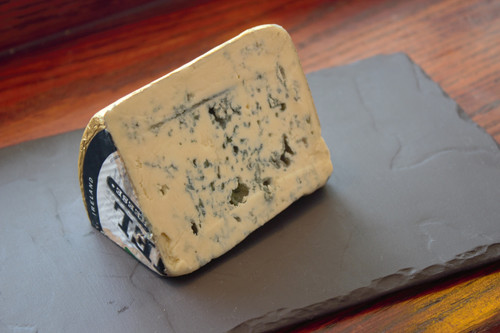 Cashel Blue is a semi-soft blue cows’ milk cheese. It is unique, as it is Ireland’s first farmhouse blue cheese and it was also the first cheese that was made on the Grubbs’ farm. It is all made on the dairy farm of Jane and Louis Grubb nr Cashel in Co. Tipperary Ireland. While some milk is purchased, the majority of the milk comes from the pedigree Friesian dairy herd on the farm. The cheese is made from pasteurised whole milk.

As far as the history of the cheese is concerned Jen and I adopted the old Irish adage that the truth should not stand in the way of a good story. So you may have heard us tell the story of how Jane, a chef, complained to Louis that she had to get blue cheeses from France, or, even worse, England, for her cooking. That as they were making butter anyway, it could not be difficult to make cheese too. And after she broke Louis’ arm in a couple of places, he started making the cheese for her. When Jen’s mom told Louis this story on her visit to the farm this summer, Louis had a good Irish laugh about this. Reality is that as early as the 1950s the Grubb family were producing dairy based products (butter and potted cream) on their farm, Beechmount, in the heart of Co. Tipperary, Ireland. In 1978 Louis Grubb returned from working as an agricultural research worker in the west ofIrelandto the farm where he was born and raised. Along with him came his wife, Jane, and their young daughter, Sarah.

Louis established a commercial dairy farm at Beechmount, selling the milk to the local creamery. Farming soon became depressed, and the monotony of milking cows day in day out, encouraged Louis and Jane to look at ways of breaking from straight farming and to diversify Beechmount. Before meeting Louis, Jane had worked as a chef for several years and maintained a love of quality food. Therefore she suggested they look at the possibility of making cheese and, having researched various styles of cheese (and learning how to make them), Jane and Louis identified that there was a gap in the Irish market with relation to blue cheese. While Danish Blue sold well in Ireland, there was no native equivalent. Jane set about developing a blue cheese and, in 1984, two years after first looking at cheese as a way of diversifying the farm, Cashel Blue production began.