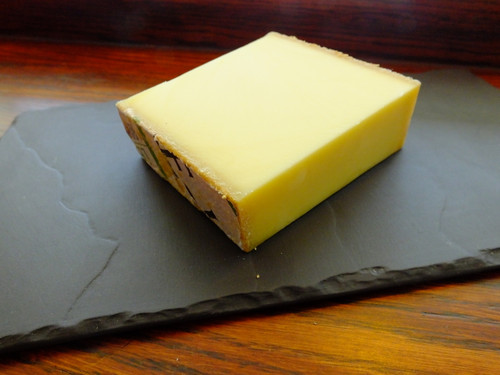 Originating in the Jura Mountains in eastern France, Comte, aka Comte de Gruyere, is one of the oldest cheeses in the world and is known to have been around at the time of Charlemagne. Its production is regulated under AOC rules that stipulate that only the raw milk from Montebeliarde and Tachete de l’Est cows may be used. The cows have to be fed grass or hay and strictly no silage.

It takes 530 liters or 30 cows’ worth of milk to produce one 80 pound wheel. The cheese is aged between 12 and 16 months. It is a washed-rind cheese so the outside is sticky; the inside is a beautiful yellow with small holes (“eyes” in cheese lingo).

The taste of the cheese can best be described as nutty with caramel overtones. It is a great cheese to have on its own or on a cracker, but like its Swiss counterpart it melts very well too.