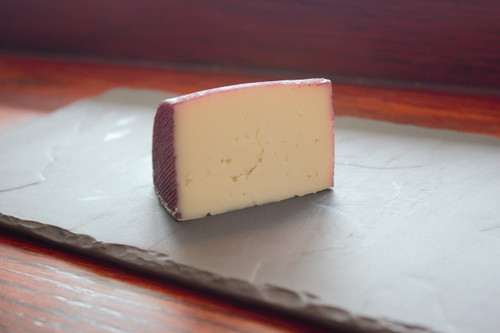 The region of Murcia, in southeastern Spain, is the birthplace of the Murciano-Granadina breed of goats. This breed produces the best milk in the country. It is a rustic animal, well acclimatized to the heat and aridness of the Mediterranean region, but with centuries of genetic selection for milk production. Its attributes include a perfect anatomy, a fine mahogany to dark-colored coat and great migrating abilities which allows it to take advantage of good grazing land.

The cheese has been made for centuries and consists in a number of different formats. There is a white version which is typically sold younger and has a more limited shelf life and the red version, The red version derives its reddish-purple hue from the fact that in the aging process the cheeses are dunked in a local red wine for 3 days. This gives the cheese its characteristic red hue and its floral bouquet.

The cheese just calls for some Spanish accompaniments like chorizo, marcona almonds or olives.