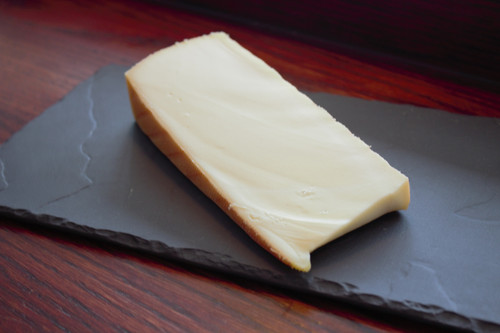 This is one of the world’s most famous melting cheeses which derived its namefrom the way it was traditionally served, i.e. scraped ("racler" in French) from the face of the cheese that was turned towards the fire and started to melt. In turn it generated its own verb as a result of how the cheese can be eaten: “to raclet” is to melt this cheese in small pans placed on or under a griddle.

The cheese is made on both sides of the French-Swiss border in the Alps. They taste very similar and can both be used as melting and eating cheeses. Raclette is often overlooked as an eating cheese because the washed rind needs some getting over as its aroma is quite pungent.

Raclette has a semi-firm smooth and creamy paste that has small dotted holes throughout. The flavor pattern is mild and very complex.

Have this cheese with fresh fruit or melt it over potatoes.

Elixia French Sparkling Lemonade with a hint of lemon 11 Oz