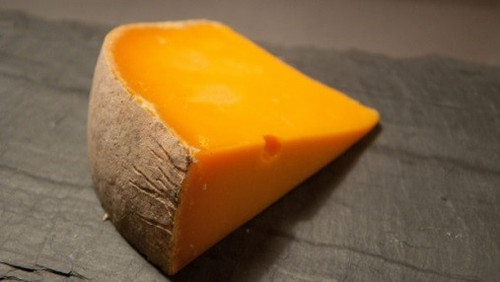 This cheese has been produced for centuries, initially to compete with the Dutch Gouda which was having the French cheeses for lunch even within France! Louis XIV ordained that the French cheesemakers were to develop a cheese that would last just as long as a Gouda but would show how the French were masters at their cheese craft.

The cheesemakers made it different by using Annatto (a natural colorant) which gave the cheese its very orangey color and in the ripening process encouraged cheese mites that naturally occur in the aging caves to do their bit too (this gave the cheese its rough exterior and its resemblance to a cantalope – the mites are solely to be found in the inedible rind). The FDA found more than the permissible 6 mites per square inch and banned imports of Mimolette in March of 2013. It has just been reintroduced in the US and that is why we felt you should have some too.

The cheese is mild, sweet and fruity, with a caramelly undertone. A great snacking cheese.