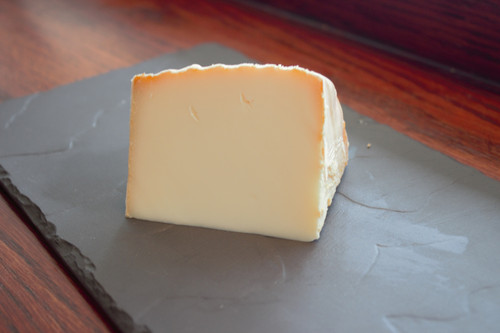 Basque region in France, Les Pais Basque. Buffered by the sea breezes coming in from the Atlantic while at the same time receiving the rain that falls down in the first elevated land mass the clouds meet, the landscape is ideal for raising sheep. Petit Basque, as this sheep’s milk cheese is called, is a mild, pasteurized version of the traditional sheep’s cheeses, like Ossau Iraty and Idiazabel (from the Spanish side of Basque Country).

It was originally produced from left-over curds, but is now a cheese in its own right. The herringbone rind resembles that of Spanish cheeses like Manchego and Zamorano but does not have the same origin. The cheese comes as a natural rind or as a waxed rind. We prefer the waxed rind as it keeps the moisture in the cheese better. The cheese has a somewhat sweet flavor with hints of nuttiness. The local dish is Petit Basque with black cherry jam, but any sweeter fruit combines well with this cheese.