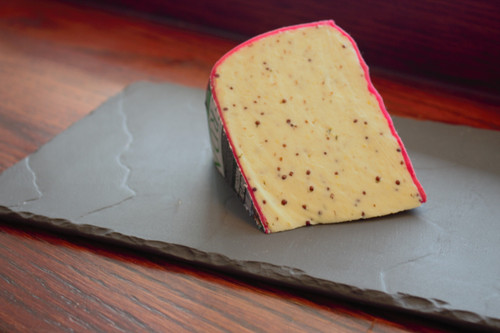 This cheese is another story of survival. After World War II small scale production of artisanal cheeses had largely ceased in Wales. It was not until quite recently that artisanal Welsh cheeses were re-introduced. This gave us back the real Caerphilly rather than the factory produced versions made in large English dairies and also saw to the re-introduction of Y-Fenni as Red Dragon was originally called. The cheese is available in yellow wax as Y-Fenni in its homeland and in red wax and as Red Dragon anywhere else.

The cheese has a cheddar base but the addition of mustard seeds and ale make it quite special. The ale gives the creaminess and some of the tanginess and the mustard gives it texture and flavor. The cheese is aged for three months.

Serve on its own or melted on a piece of toast.