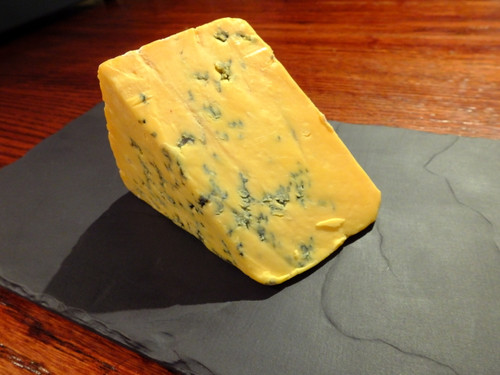 Shropshire Blue, originated at the Castle Stuart Dairy, Inverness, Scotland in the 1970's where it was called 'Invernessshire Blue' or 'Blue Stuart'. It was made by a Scottish cheesemaker named Andy Williamson who was trained in the making of Stilton in Nottinghamshire. He returned to Scotland to produce the first Scottish Blue cheeses which included cheeses similar not only to Stilton but also to Blue Cheshire and Wensleydale. Invernessshire Blue, or Blue Stuart, was marketed throughout the rest of the British Isles as Shropshire Blue, a name chosen simply to help its sales and acceptability.

However, in 1980 production of the cheese stopped as the Milk Marketing Board of Northern Scotland shut down the creamery, killing off a number of Scottish cheeses and its only blues. Fortunately, the making of the cheese moved to Nottinghamshire when Long Clawson Dairy and Colston Bassett Dairy took up production. An ironic return to the area where the original inventor of the cheese, Andy Williamson, was trained.

The cheese is essentially an orange colored Stilton style cheese. It is made from pasteurised cows' milk using rennet suitable for vegetarians. The orange color derives from annatto, a natural colorant obtained from the seeds of the Bixa Orella tree. The cheese is matured for 12 weeks but it can be matured for a further 12 weeks to produce a creamier fuller flavored cheese.

Serve the Shropshire Blue with sweet fruits like pears or peaches.