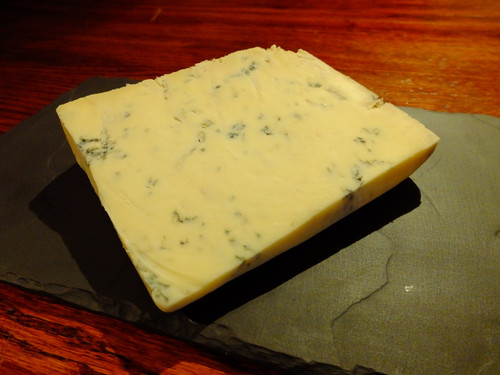 Stilton, also known as “The King of Cheeses”, is one a handful of British cheeses granted the status of a “protected designation origin” (PDO) by the European Commission. Only cheese produced in the three counties of Derbyshire, Leicestershire and Nottinghamshire and made according to a strict code may be called Stilton. There are just seven dairies licensed to make Stilton.

Stilton is situated about 80 miles north of London on the old Great North Road. In the 18th century, the town was a staging post for coaches travelling from London to York. Horses would be changed and travelers served light refreshments at one of the hostelries in the town. At the Bell Inn travelers were introduced to a soft, creamy, blue veined cheese which subsequently took its name from the town. The cheese had been bought from a farmer’s wife by the name of Frances Pawlett who lived near Melton Mowbray in Leicestershire. The cheese was never made and will never be made in the town that gave it its name.

Serve the Stilton with sweet fruits like pears or peaches.