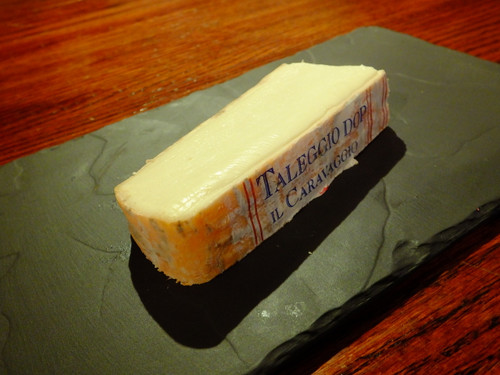 Accompaniment: A wine with a lot of character either red, white or rose

Known as a “nosey”, people are sometimes put off from trying this wonderful cheese. The smelly outside, however, covers a wonderfully smooth and creamy inside with a unique flavour pattern that is characterized by meaty, nutty and fruity overtones.

Taleggio derives its name from the place it was first made, the Val Tallegio region in the province of Bergamo in Lombardy. As far back as the 10th Century the farmers from that region made a flat cheese with the excess milk they produced and aged it in the local caves. It can now only be made in Lombardy, Novara and Piedmont, northern Italy and its production is governed by very strict rules. One of the most characteristic features is the rind of the cheese that gets its orange color and stickiness from the brine that it is washed with. The mold that develops originates from the caves the cheese has been aged in for almost a thousand years. Although the rind is edible, it is very strong tasting and a bit gritty, so we recommend eating the inside only.

Serving suggestion: on crusty bread. This cheese needs to be given time to get to room temperature to get gooey and develop its full taste (and aroma).