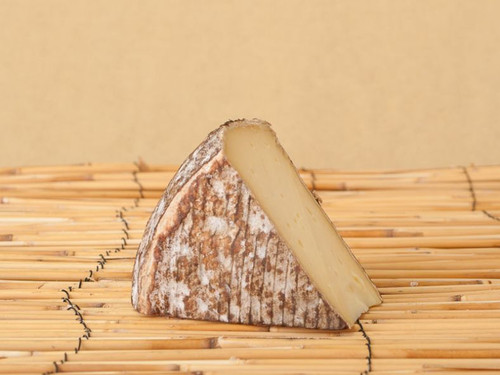 Today, still made according to the rules of the art and in compliance with rigorously defined standards, Tomme de Savoie remains a subtle nuance of aromas.

A true local gastronomic institution, Tomme de Savoie has stood the test of time and conquered its letters of nobility.

Since 1996, in fact, it has benefited from a Protected Geographical Indication guaranteeing its quality, and is adorned with a marking emphasizing its identity

Tomme de Savoie Fermier is a farmhouse cheese, hence its name. This means that it is made from start to finish by one farm, from the milk of the animals who live there. It has a velvety rind of gray and white molds, holding an interior of straw colored paste with a few small holes here and there.

Made using raw cow's milk, the cheese has a pliant and creamy texture and has flavors of milk, hay, earth, and nuts.

Production of Tomme de Savoie uses semi-skimmed milk. Original production of this cheese was as a by-product of aged cheeses from the Savoie, such as Beaufort. The affineur of our Tomme de Savoie is Joseph Paccard, who we met with recently at the Salon du Fromage in Pari